The last shuttle, the 1985-model Atlantis, is preparing to end an era of manned space flight when it glides back to Kennedy Space Center on July 20.

Remembering the space program that grew up with my generation, I am drawn back to Christmas Eve 1968, when millions of us were glued to TV sets to watch the first humans to leave Earth’s orbit attempt to enter lunar orbit over two-hundred-million miles away aboard Apollo 8.

We Earthlings were ready for some good news. The long and divisive war in Vietnam had taken a nasty turn with the Tet Offensive. Assassinations of Martin Luther King and Robert Kennedy shocked our spirits. Soviet tanks put down Prague’s move toward democracy. This was a year when we were at our worst, but we still hoped for the best.

Miscalculation of complex maneuvers to leave earth orbit and later enter lunar orbit would either create another lunar crater or catapult Apollo 8 on an endless orbit around the sun. Using computing power comparable to today’s pocket calculators along with a sextant, the crew, consisting of Jim Lovell, Bill Anders, and Frank Borman, attempted to maneuver their tiny craft into position with timed rocket and thruster burns while we watched and listened.

The critical burn was made on the dark side of the moon where radio signals could not reach. It was one of the most agonizing periods of silence ever broadcast. Millions exhaled in simultaneous cheers when the crew finally resumed contact, precisely where they needed to be.

Astronaut Bill Anders loaded a handheld Hasselblad with color film and snapped an image that is forever stuck in our collective psyche; a lonely blue planet rising above the cratered gray surface against the black background of space. One space capsule took a photo of another space capsule. Both were equipped with limited capacity to support life in the hostile vacuum. One was designed to do so for 147 hours; the other for eons. One had a fixed number of three passengers; the other had 3.5 billion, which will double to 7 billion sometime this summer.

As the shuttle program ends, perhaps it is time to turn our attention to the lonely blue mother ship in that 1968 image. Another 75 million souls climb aboard each year. The gauges show the temperature is rising. Water, food, and fuel limits are becoming increasingly apparent. The O-rings and the heat shields are showing some damage.

We get one chance for a course correction and it happens on our watch. While we still have a choice, will we choose our worst, or will we choose to be our best? 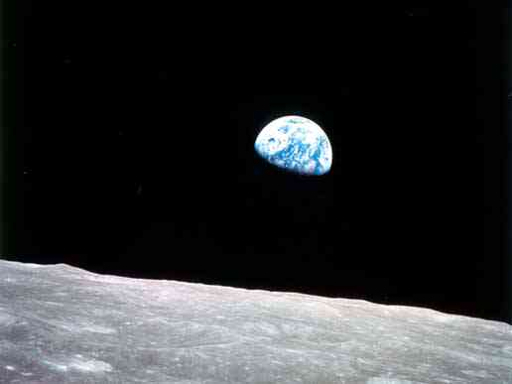 Bill, this is such a great post; thank you for sharing your thoughts.

I was fortunate enough to be at the launch of Atlantis and proud to be a part of it. It was the highpoint of my lifelong interest in spaceflight (I'm super impressed that you got all the details exactly correct!) that has me excited more than sad, about the future.

But you are also exactly right to put the occassion in the context of our life on Spaceship Earth. We have a big job to do to keep this old ship running sound and true.

Science and technology will be a big part of that, but without compassion and love to guide it, it may be an empty exercise.