Four years ago, a majority of the 540 residents of Chrisney, Indiana decided they wanted their own public library branch their kids could walk to after school. They had no money to build a library, no viable existing buildings or partnerships for a shared storefront library, their public library district refused to support capital or operating costs for a new branch and the town had no money or bonding capacity for the project. The local school district cited legal risks in sharing the Chrisney Elementary Library media center with the public. If the folks in Chrisney wanted library service, they had to drive about 25 miles round trip. Andrew Carnegie would be appalled, but this is becoming common throughout rural America as consolidation of public schools and libraries is the norm to save property tax money.

But this was clearly a town that was not willing to give up on an idea they deemed critical to their civic identity and the quality of their children’s future. I was repeatedly amazed to see a quarter of their population show up for planning meetings. As the architect performing their feasibility study, my brain said “this is impossible, walk away” while my heart said “there’s got to be a way to pull this off.” The way was clear - build a new library with virtually no operating costs.

After months of consideration, the North Spencer County School Corporation agreed to donate an ideal one-acre site with street frontage that also backed up to Chrisney Elementary School’s wooded outdoor learning lab. The town sweetened the deal by offering to provide free sewer and water service and site maintenance for the life of the building. Over 100 local residents signed up to volunteer at the service desk of the new library. This was a deal too good for the Lincoln Heritage Public Library to refuse and they agreed to accept a new net-zero-energy library branch from the Town of Chrisney, should they succeed in finding capital funding for such a facility, without relying on the bonding capacity of the LHPL. And, oh yeah, there’s that net-zero-energy thing.

All that remained was coming up with an affordable design for a solar-powered public library, funding it, bidding it, and building it. No precedent existed.

Undaunted, my team at my former employer, Browning Day Mullins Dierdorf Architects, designed a net-zero-energy library and the Town of Chrisney applied for an Indiana Office of Community and Rural Affairs grant that provided the bulk of the funding for this $478,000 project. The community raised $66,000 for their local match in an incredible six weeks. This illustrates, I think, a little-known fact – community buildings that push the clean technology envelope in the pursuit of education are grant magnets. 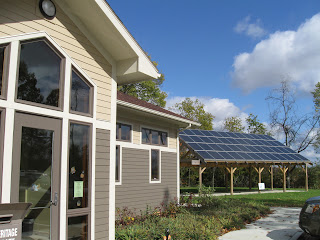 An 8.9-kilowatt grid-tied photovoltaic system (just under Indiana’s worst in the nation net metering limit of 10 kilowatts) was designed to produce more than enough power for this all-electric building that employs geothermal heating and cooling and old-fashioned passive solar design. Transparent solar panels roof the Learning Power Pavilion that provides an outdoor classroom for the elementary school’s outdoor learning lab.

Did it live up to the hype? Does this little library really produce as much electricity at it uses?

A year has passed since the library opened and I was anxious to see how it had performed in its first full year with real people, real plug loads and real weather, which included a brutally cold winter. I asked for the first year’s utility bills.

Every electric bill for the full year came up with $0 due and all had a net credit! They actually generated over 1800 kilowatt hours more than they used. No gas bill. No water bill. No sewer bill. The town maintains the site. The library district provides a librarian. The elementary school students stroll across school property to get there. Everybody wins. 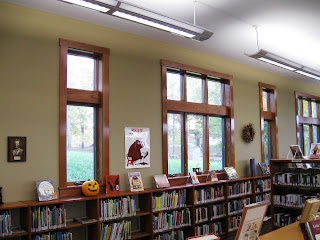 Sometimes it pays for small towns to dream big. Sometimes that is the only feasible way. Just ask the parents reading with their kids in Chrisney Branch Library.
Posted by William M. Brown, AIA, LEED AP 1 comment:

A local journalist recently asked me, “Why conserve water here in South Central Indiana when we have an unlimited supply?”
It is indeed comforting to have a 10,750-acre reservoir in our back yard and 44 inches of annual rainfall. Water conservation was not a consideration in Atlanta, either, prior to their historic drought in 2008. When the water level of their 38,000-acre Lake Lanier dropped 21 feet, revealing the foundations of houses that had been torn down in the 1950s to make way for the reservoir, water conservation suddenly became an issue. Even if we manage to dodge the drought bullet, wasting water does come at an increasing cost, including some costs we rarely consider.
One hidden cost associated with water use is the amount of energy we use to pump, filter, heat, cool and retreat water before putting it back into the water cycle. When the City of Indianapolis began investigating their energy use and their greenhouse gas emissions, they were surprised to discover that their second largest electrical energy cost was for pumping water. Heating hot water can account for as much as a third of home energy bills. Chlorine and other chemicals required to filter and treat potable water and sewage constitute another hidden cost.
For Indiana University Bloomington, where 11,000 students reside on campus, water use is a $3.4 million annual cost (combined water, sewer, and storm water), not counting the substantial energy cost of pumping and heating water. Although campus building area increased by 480,000 square feet since 2004, water use has been reduced by over 24% through simple but effective conservation programs initiated by IU Physical Plant, saving millions of dollars that can be spent on educating students.
The greatest associated cost of wasted water may well be the environmental and health costs of pollution associated with fossil fuel combustion, which provides the energy to pump, process, and heat our water. We all pay these costs indirectly. Air and water pollution already impact the quality of our water supply. Climate change, population growth, and increasing consumption will provide increasing stress to our water quality and quantity and make it necessary for all of us to work together to conserve this critical life-supporting resource.
“When oil runs out, motors stop. When water runs out, life stops.”
Turkish official
Posted by William M. Brown, AIA, LEED AP 2 comments:

I enjoyed Spring Break in exotic, sunny Bloomington where I decided to catch up on my reading. So what does a professional change agent who leads and teaches organizational change read for fun? Uh, books about change management? Yes! And I have three current bestsellers you must read if you want to boost your horsepower as a catalyst for change, even if the target of that change is yourself.

Switch: How to Change Things When Change is Hard – Chip Heath and Dan Heath

You have probably already read the Heath brothers’ first bestseller, Made to Stick. If not, you may want to grab that to find out why some great ideas stick and others don’t. Their new book surpasses that essential first hit. In Switch, they use an analogy for our brain function that says we all have an emotional component, the Elephant, and a rational component, the Rider. They argue convincingly, referring to research and anecdotes, that both have to be reached to affect real change. They suggest techniques to direct the Rider, motivate the Elephant, and shape the Path using examples of successful change efforts around the world. This book is essential if you are trying to change your own behavior or perhaps that of a major university.

Drive: The Surprising Truth About What Motivates Us – Daniel H. Pink

Pink returns! No . . . not her. I’m talking about Daniel Pink, author of A Whole New Mind and now another bestseller, Drive: The Surprising Truth About What Motivates Us. So, you think external rewards are the best way to motivate ourselves and others? Pink says that’s a mistake and he has plenty of research to back up his assertion that the secret to high performance and satisfaction is the deeply human need to direct our own lives, to learn and create new things, and to do better by ourselves and our world. Intrinsic motivation trumps extrinsic motivation. In his words, “we know that the richest experiences in our lives aren’t when we’re clamoring for validation from others, but when we’re listening to our own voice – doing something that matters, doing it well, and doing it in the service of a cause larger than ourselves.” He examines three elements of true motivation – autonomy, mastery and purpose (AMP) and offers a practical toolbox of techniques to put these into action.

Linchpin: Are You Indispensable? – Seth Godin

Seth Godin’s previous bestsellers, like Purple Cow, The Dip and Tribes are among the most dog-eared books on my shelf but this one is a level of magnitude more important than those previous jolts of inspiration. This book is about finding one’s unique value in a rapidly changing world where none of the old rules seem to apply. If you are just showing up for work, you are replaceable. He argues that we all need to become artists that do “emotional labor” whether we are waiting tables or bagging groceries or working for a major university. We need to be creative, passionate and personal, and we need to “bring our gifts to work” no matter what our job description. Godin finds indispensability at the intersection of dignity, generosity and humanity and he believes we all have an artist within. He suggests that our resistance from expressing our artist within is coming from our “lizard brain” which is full of fear of risk (the Heath’s Elephant) and he provides strategies for overcoming that resistance.

These three have considerable overlap and, especially when read together, they make a great Swiss Army knife for personal and organizational change management and an elephantine motivational kick to the lizard brain. Read them and become driven to switch to indispensability.