Pedaling Into the Friendly Future Together

On a typical day, about 1,800 of these human-powered vehicles head to the Indiana University campus from points all over Bloomington and its suburbs. Hundreds more ride bikes on campus and park in over 3,400 bike rack slots. While many of these cyclists are students, about 10% of faculty and staff also ride bikes to work at IU. About 70% of faculty, staff and students live within three miles of campus, which is a pleasant 15-minute fat-burning commute by bike. If these 1,800 people drove their cars, four Henderson parking garages or 14 acres of surface parking would be required, and the streets to campus would receive a parade of cars six miles long. 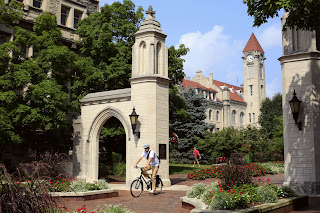 The 61st running of the Little 500 is next weekend and it’s hard to go anywhere without encountering a colorful bike team in training. The Academy-Award-Winning movie that celebrated Bloomington’s love affair with the bicycle, “Breaking Away,” will be featured this month at the fabulous IU Cinema.

Against this backdrop, it is perhaps no surprise that Indiana University was one of the first 20 universities in America to be selected as a Bicycle Friendly University by the League of American Bicyclists. The campus follows the lead of the city of Bloomington, which was the first Bicycle Friendly Community in Indiana.

Representatives of the League of American Bicyclists, including Bill Nesper, Director of the Bicycle Friendly America program, will visit Bloomington next week to celebrate our collective bicycle friendliness. Around since the dawn of the two-wheeler in 1880, the League promotes bicycling, educates cyclists and motorists, and advocates on behalf of cyclists with legislators across the United States. Its Bike Friendly America Blueprint provides guidance on engineering, education, encouragement, enforcement and evaluation to improve bicycle transportation.

IU students, faculty and staff, with a common interest in safe and convenient bicycling, are forming a Bicycle Friendly University Steering Committee. There’s much work to be done in all five of the E’s mentioned above, but this award provides some tailwind and a roadmap. The campus team can also draft behind the success of the city team as they ride to a safer, cleaner, healthier, less congested community together. Let’s ride!
Posted by William M. Brown, AIA, LEED AP No comments: